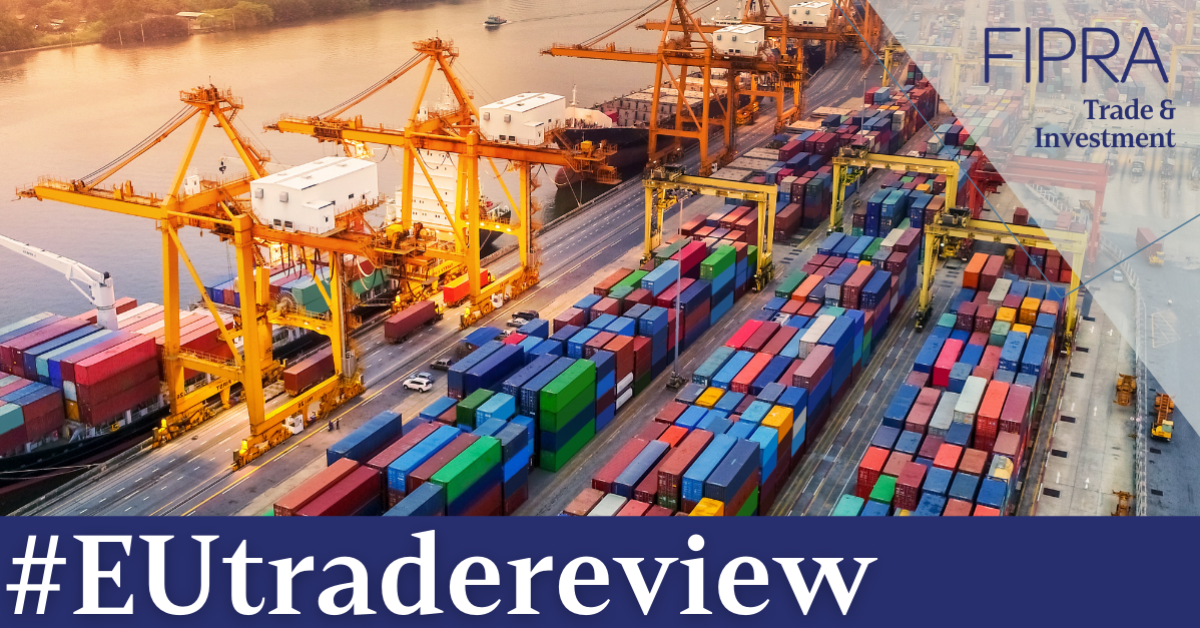 EU trade is under review, at a time when the functioning of the World Trade Organization (WTO) is also under challenge, and when international mistrust threatens the very idea of a global economy open for innovation and entrepreneurship.

Against this backdrop, FIPRA International hosted a webinar titled “EU trade policy & WTO: Open world or return of division?” where distinguished panelists discussed the meaning of the EU’s open strategic autonomy and how international partners see it.

Ignacio Garcia Bercero, Director, DG Trade, set out two challenges that the trade policy review aims to address. The first is how to ensure greater policy integration so that trade policy can contribute to green and digital transition. The second is how the EU should steer the WTO reform process and cooperate with international partners to safeguard multilateralism.

Although it is still too early to tell Member States’ positions on future proposals following the trade policy review, Ignacio did not expect there to be a highly divisive debate as the results of the consultation are in line with those that have been emphasised by Member States.

Robert Madelin, Chairman of FIPRA International, wanted to see modesty and mutuality included in the new EU trade strategy. In his opinion, mutuality means big players should enable each other to grow and recover, while modesty means that in the new and challenging areas, it is better to insist on coordination and prior consultation as the first step instead of judiciable detailed rules to avoid triggering trade wars inadvertently.

It’s very clear that from the economic, political, and even environmental point of view, Europe must remain committed to multilateral, rules-based systems — towards open economic policies.

According to Ignacio, “It’s very clear that from the economic, political, and even environmental point of view, Europe must remain committed to multilateral, rules-based systems, towards open economic policies.” He stressed that whatever proposals the EU would put forward, they would always be in full compliance with the EU’s international commitments.

Counting on DG Trade to insist on combining both open and strategic elements into the notion, Andre Sapir, Economist & Scholar from ULB & Bruegel said, “Europe needs to reassert its commitment to an open rules-based, multilateral trading system,” adding that it is a matter of values and the EU should not change.

How does China see the open strategic autonomy? Stuart Lau, South China Morning Post Europe Correspondent, believed that China’s reaction is not so much on trade but more on geopolitics. “What China is a bit scared of now with a Biden presidency is to see a revival of a Transatlantic Alliance to tackle the rising influence of China.”

Despite the fact that there are a variety of interpretations on the concept of open strategic autonomy in the US, Peter Chase, Special Advisor at FIPRA International, said that Washington will pay more attention to things that the EU does to search for an understanding of open strategic autonomy. But the new Biden administration will be much more supportive of a multilateral, rules-based approach.

Robert further added that it is necessary to reassert how important Europe’s open engagement in trade and investment globally is for the continent. “Autonomy should never mean closed” and “strategic autonomy must be consistent with proportionality and non-discrimination,” he said.

Recovery is about trust. Trusting the economy; trusting that the rules of the game are not changing all the time. I would hope that the trade policy community, not just in Europe but globally, would abide by the same kind of consistent, rules-based behavior.

Ignacio highlighted that the WTO reform will focus on three key issues. Firstly, there is a need to restore trust, especially in terms of how the WTO can contribute to sustainable development goals and solutions to restore a functioning appellate body. Secondly, modernisation of WTO rules, and lastly, dealing with the role of state in the economy. In order to implement these issues, the EU needs to develop and work within alliances that have clear objectives to putting forward a multilateral agenda.

Concurring with Ignacio, Andre added that the countries in the Ottawa group are like-minded countries who believe in the values of the WTO system and are looking to sustain the system. For Andre, the big challenge now is how to make sure that there is a WTO system able to accommodate a wide and heterogeneous group of countries, which necessitates adding new rules to the system on certain issues like state-owned enterprises.

“It is a big issue how the EU and the rest of the developed world should use the WTO rules to deal with China’s state economy,” Stuart said. Skeptical of bringing market model discussion in the WTO reform talks, China is accusing the EU of paying agricultural subsidies uncontrolled by WTO rules to avoid this market economy discussion.

The perception of fairness of the multilateral trading system is a key question. In order to have trust, there has to be the perception of fairness, Peter noted. Governments need to better support workers who are adapting to changes brought by multilateralism. The new Biden administration will go back to free and fair trade putting greater emphasis on protecting workers and raising standards in other countries.

To understand how the ongoing EU trade review may impact your business, please get in touch with our team who stand ready to advise on how to respond to potential risks and opportunities.