“Invest in sustainability and … invest sustainably” 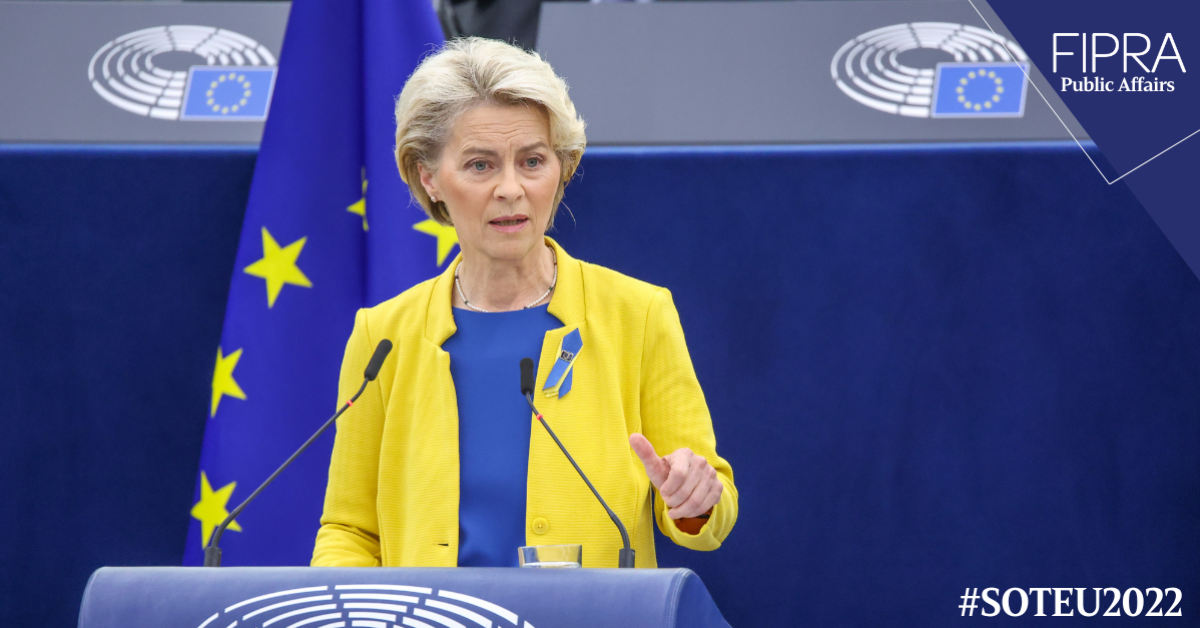 The President shared her perspective on Europe’s biggest challenges such as the war in Ukraine, rising energy prices, Europe’s energy independence and climate change. She also announced the need to forge trade alliances with like-minded countries to ensure the supply of critical raw materials to Europe.

Most attention was given to reconfirming Europe’s solidarity with Ukraine and how to address the energy crisis. The Commission plans to introduce measures to reduce overall electricity consumption and proposes a cap on the revenue of companies producing electricity at a low cost, which should help to raise more than 140 billion euros for its Member States.  The same approach will be followed for the profits made by major oil, gas, and coal companies, to ensure that the fossil fuel industry also does its part.

Below we have identified a few highlights from the speech and from the accompanying letter of intent which the Commission President submitted with her speech to the President of the European Parliament and Czech Prime Minister Petr Fiala. This aims to clarify the potential implications on different sectors and the key initiatives planned for 2023 by the European Commission.

The President raised concern about external threats and malign interference by foreign entities spreading misinformation that could undermine Europe’s democracy.  The Commission has already introduced legislation to screen foreign direct investment in European companies, and wants to ensure the same is done to protect Europe’s democratic values. In this regard she announced that a Defence of Democracy package will be presented.

In 2023 it is expected that the Commission will explore several instruments that incentivize the joint procurement of defence capabilities and further bolster the defence funding mechanisms. Defence was not explicitly mentioned, however, in this year’s SOTEU.

Even though the digital transition priorities were not explicitly mentioned in the speech, President von der Leyen listed three new digital initiatives, in the accompanying letter of intent:

Also mentioned in the letter of intent, is the legislative proposal on the digitalisation of travel documents to facilitate travel, for which the Commission is now collecting feedback before its expected publication in Q3 2023. According to the impact assessment, the initiative’s overarching goal is to create a framework for simplifying travel for EU citizens and third-country nationals, while establishing a unified standard for digital travel documents issued by the Member States.

There was an emphasis on how access to some critical raw materials and building up strategic reserves is crucial for the twin green and digital transitions.

For the transport sector, lithium will be high on the list of priorities as 60% of lithium is produced in China. Lithium is important to produce batteries – which are in turn, crucial to decarbonise the sector. To help secure this vital area of European interest, von der Leyen announced the Critical Raw Materials Act. This legislation will seek to:

The past months have shown how critical the Green Deal is for the European Union. More specifically, the energy crisis has featured high in the President’s address, taking considerable room in comparison to the other Green Deal-related policy priorities. However, the Commission president has already announced that Europe will be ambitious in its contributions to both the upcoming UN Conference on Biodiversity in Montréal, and COP27 in Sharm el-Sheikh.

A set of measures to control the rising electricity prices were proposed, notably by decoupling the influence of gas on the electricity price and by initiating a comprehensive reform of the electricity market.  The objective is to reduce the negative impact of the current crisis on citizens and businesses.  At the same time, attention was also given to accelerating the uptake of hydrogen; which should contribute to delivering higher renewable energy targets.

The concrete actions proposed include:

Although healthcare was not a central topic of the President’s intervention, she mentioned the importance of coordinated efforts in the Member States during the COVID-19 pandemic. She also reiterated that the EU had secured 4 billion doses of COVID-19 vaccines, and that despite having faced the worst economic recession since WWII, the EU has also seen the fastest recovery since the post war Baby Boom.

Von der Leyen also mentioned that following suggestions made during the Conference on the future of Europe, the Commission will start working on a new initiative on mental health next year. She stressed that appropriate, accessible, and affordable support can be lifesaving and that additional work is required in that regard.

The President also acknowledged the need for an enabling business environment, a workforce with the right skills, as well as access to critical raw material industry needs in Europe. She confirmed the importance of ensuring the EU’s strategic autonomy. In that context, von der Leyen announced increased participation in Important Projects of Common European Interest (IPCEIs) and the creation of a European Sovereignty Fund, to “make sure that the future of industry is made in Europe.”