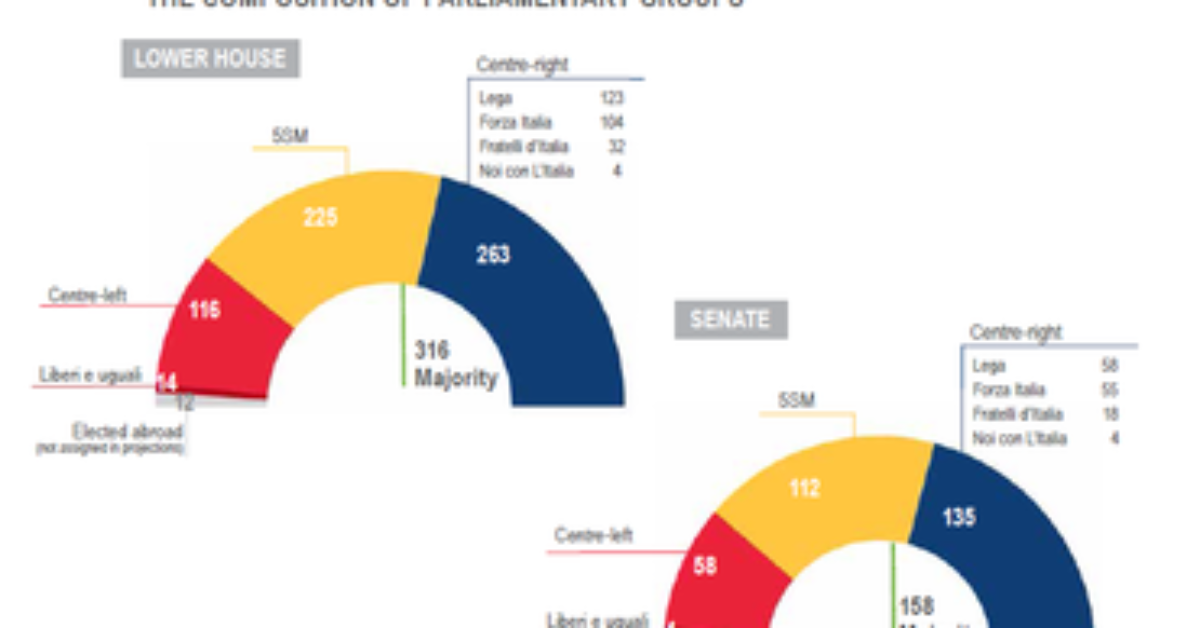 Mariella Palazzolo from Fipra Italy shared a report on the outcome of 04 March’s Italian general elections.

In line with expectation:

Contrary to what polls had predicted, however:

Parties’ nation-wide performance had a domino effect in single-member districts, where 1/3 of both the Houses’ seats were awarded – the remainders being proportionally distributed among parties hitting 3%.

The centre-right coalition has the highest number of seats, but it falls 50 MPs and 21 Senators short of a majority in Parliament. The same goes for the 5SM, which is 90 MPs and 46 Senators far from a majority.
This means that from an arithmetical viewpoint, the control of Parliament can only be achieved through a compromise agreement between parties that have not run together at general elections.
The election of the 2 Houses of Parliament’s chairs, starting on 23 March, will give a first indication to the President of the Republic Sergio Mattarella of parties’ availabilities to reach such an agreement, as long as:

In both the cases, an agreement between 2 of the 3 main blocks (centre-right, 5SM and centre-left) will be needed.
Mattarella’s talks with the parliamentary groups to understand their attitude towards building up a parliamentary majority will start on 29 March. On that occasion, answers will be given to:

A German-style large coalition between the centre-left PD and the centre-right Forza Italia (without Lega) can be ruled out: by largely backing anti-system parties (5SM and Lega), voters have proven that this is not an option they would like. The forced coexistence of PD and Forza Italia in the first years of the past legislature is probably a main cause of their electoral defeat on 04 March. Voters would hardly accept a government made of the two main losers of general elections.

23 March – Parliament is summoned to appoint the two Houses’ Chairs.
25 March – Elected MPs shall formally register with a Parliamentary group by this date.
29 March – The President of the Republic starts talks (“consultations”) to understand whom to entrust to form a new government, basing on the electoral outcome.
4 April – The leaders of Parliamentary groups should take part in consultations by this date.