Political will, not treaty change, needed for better coordination during pandemic response 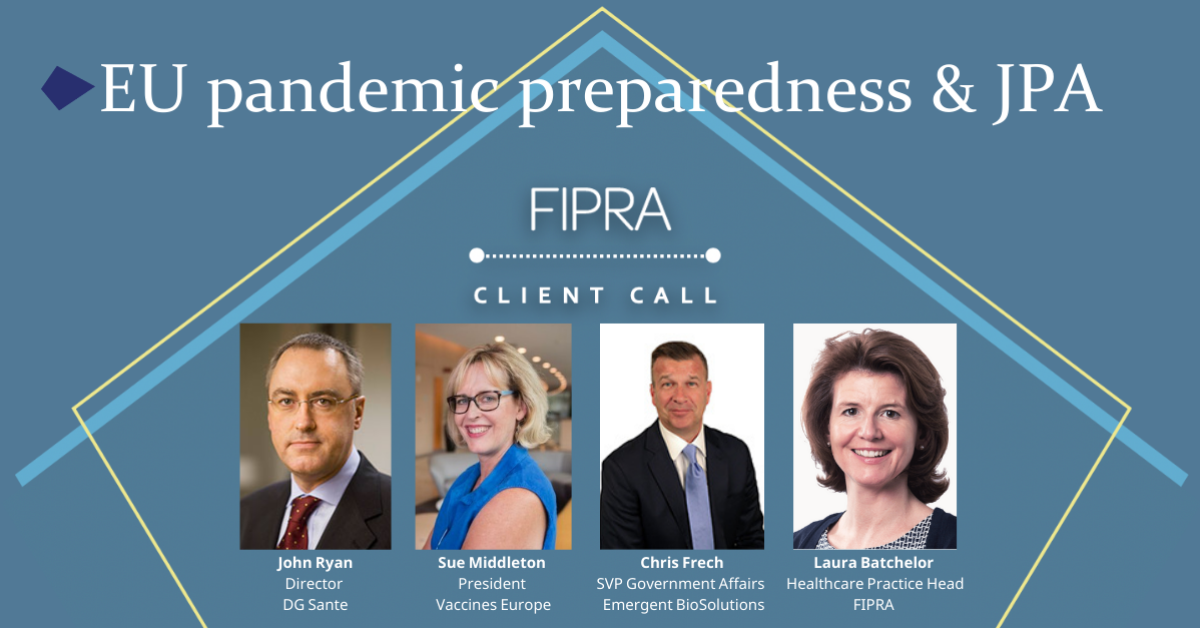 In FIPRA’s latest Client Call, held online on June 10, John Ryan, Director of the Commission Public Health and Crisis Management Directorate, gave an overview of the use of the EU mechanisms for the procurement and stockpiling of medical countermeasures: JPA, and RescEU and the Emergency Support Instrument.

Member States have successfully used these mechanisms to complement their own national procurement for PPE in the context of the current COVID-19 crisis. However, it has become clear that there is a need to strengthen the existing systems in order to deliver medical supplies and equipment at short(er) notice, and also to encourage a more secure supply line. This would require the establishment of stockpiles of medical countermeasures across Europe.

There is also a need for greater coordination in preparedness planning with the Member States. This does not require treaty change but political will for effective coordination and improved governance so that scientific advice reaches senior decision-makers at the right time. The role and expertise of ECDC will have to be further strengthened. The initiative by Emmanuel Macron and Angela Merkel on Covid19 recovery provides a clear political steer on the need to overcome the shortcomings we have seen.

It was noted that in the face of Covid19, there is a race to find a vaccine, but no guarantee of success. Companies are scaling up manufacturing in a manner unlike standard vaccine production, and there is a need for greater risk-sharing between companies and governments. It makes sense that the EU can procure as a block and spread the risk across a number of countries, rather than procuring country by country.

In the USA, the government has been establishing for a long time public-private partnerships to fight health crises based on three priorities: needs, capacities and capabilities. All three priorities are supported with an adjusted flexible regulatory framework. The Biomedical Advanced Research and Development Authority (BARDA) system, which is one-stop-shop for all involved companies, has been deployed in the development of vaccines and therapeutics. However, in the EU the political situation is much more complex as companies are in discussion with national and European stakeholders.

The benefits of the BARDA system were noted in identifying promising novel medical countermeasures and assisting in both development and manufacturing simultaneously allowing for a fast response. A BARDA-type approach in the EU was emphasized as a valuable possible longer-term solution. The need to strengthen the international framework of the WHO, and its cooperation with institutions such as the ECDC, was also highlighted.

Some key lessons from the pandemic to take forward in preparation for future health emergencies include:

On next steps, John Ryan stated that the European Commission will produce a proposal on stimulating the production of Covid19 vaccines and therapeutics, as well as a proposal on how successful vaccines should be deployed. It was noted that the EU has a particular role in ensuring equitable access to therapies across the EU and the globe.

Other actions that the Commission will be focusing on is preparing for a possible second wave of Covid19, ensuring availability of vaccines and therapeutics, and launching a discussion with the German Presidency on possible changes to the legal mechanism to strengthen the responses to cross-border health threats.

The conversation was led by veteran journalist and moderator Jacki Davis, featuring: