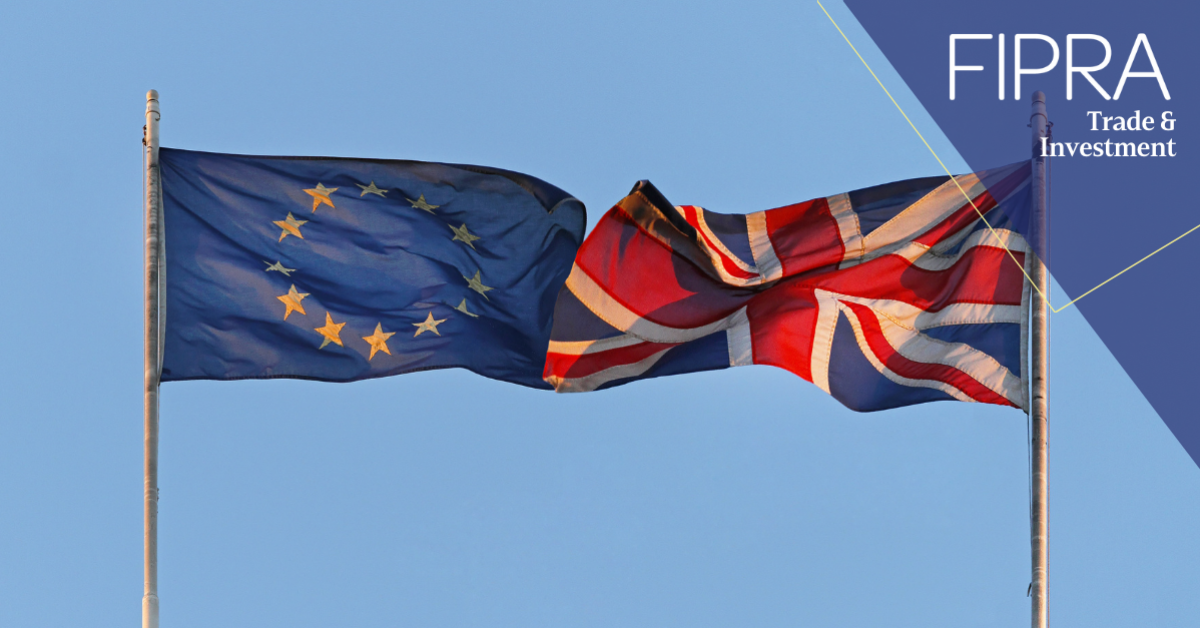 With the EU-UK Trade and Cooperation Agreement (TCA) now in effect, goods exporters are coming to terms with a raft of new trade barriers. While adjustment to the new rules and systems continues, much about the future EU-UK trading relationship remains uncertain.

On 11 March, FIPRA International and Lexington (UK) jointly hosted a webinar to take a closer look at some of the urgent questions that have surfaced over the past couple of weeks.

The discussion was moderated by Lucinda Creighton, Founder and CEO, Vulcan Consulting (Ireland).

Lucinda opened the conversation by making the observation that the TCA the EU and the UK concluded at the end of last year was quite unique. Unlike traditional commercial agreements whose main ambition is to foster economic convergence, the TCA aims to determine a set of parameters that allow for managed divergence over time.

Having said that, the substance of the agreement is not dissimilar to that of other conventional Free Trade Agreements (FTA).

As we know, there were a variety of potential trading models available to the UK after Brexit. The Johnson government was clear that it wanted a “Canada-style” deal, and that is essentially what we have – a conventional FTA, eliminating tariffs for products that meet Rules of Origin requirements, and sectoral annexes to address specific non-tariff barriers.

From a goods perspective, a high degree of friction has been introduced as a result be it around customs procedures, delays at the border, or additional regulatory requirements.

Where do we go from here?

“We are in a very different position than we were during the negotiations,” Robert remarked. At the moment, political will on both sides of the Channel is misaligned, and trust is low. The question we should seek to address is, how can we make things better than they are now? This side of the Channel, the key will be to try and reduce the risk perception on the part of European regulators. One way to do that is by making use of the new governance architecture of the agreement.

The partnership council co-chaired at ministerial level together with numerous supporting specialised committees provide an adequate forum to raise issues critical to business continuity on either side of the Channel.

Institutionalised exchanges at working level on technical issues can play a crucial role in fostering constructive relations and swiftly addressing some of the challenges businesses have been struggling with these past weeks. What remains unclear is how long it will take for both sides to move away from trust-eroding political skirmishes and get down to the nitty-gritty.

Seen from Westminster, the picture that emerges is one of opportunism. According to Mike, the approach the Johnson government has been adopting is tactical rather than strategic, political rather than economic. It is about UK exceptionalism – nothing else.

Interestingly, this may turn out to be the reason why there is likely to be renewed scope for business to engage with the government. Intent on promoting novel, better ways to regulate certain sectors on the domestic front, the government is likely to become increasingly responsive to those views among the business community that advocate a step change.

While the highly political phase we are in may not yet have come to an end, Mike persuasively argued that there was room for manoeuvre for corporate actors to exploit the Johnson ministry’s desire to regulate differently. A strategic vision may be missing from the political equation, but constructive engagement is on the cards.

Regulatory divergence – the same, only different?

“Level playing field” provisions – as the new element in the TCA – have received considerable attention during the negotiation and we have yet to see how they may translate to policy action. It remains unclear whether rebalancing clauses such as consultation and arbitration procedures will be used at all, and if so, how often, and with what outcome.

Robert reminded the audience that “there are precedents for addressing the issue of regulatory divergence”. Inconsistencies in regulation between two distinct jurisdictions are not new; and may be reasonably expected to arise from domestic policy priorities between two commercial partners.

A number of tried and tested solutions do exist, and while they may differ in their effectiveness, they all have one thing in common: trust. If a reasonably high level of trust is being instilled in the bilateral governance fora we touched upon earlier, potential divergence can be better managed, and risk to business and the wider community, minimised. Trust, in this case, can indeed breed trust.

“There is an appetite for divergence in certain quarters of the UK,” Mike said, adding that “any divergence is unlikely to materialise in the short term, however.” In London, policymakers seem to have embraced the dictum “convergence where necessary, divergence where possible”.

Where the government is able to convincingly show that it can do things differently – and successfully – it is likely to do so. Such opportunity may be hard to come by initially as political bandwidth across the Channel is low. There is a need to dedramatize the political relationship and, at the same time, to create a working-level environment conducive to a shared appreciation of the joint challenges we face.

Robert borrowed an example from across the pond and argued that it would be interesting to contemplate the birth of an organised EU-UK consumer voice in the debate – akin to the well-established transatlantic forum. This would offer much-needed space to politicians by setting the agenda from the bottom all the way up.

Looking through the sectoral lens

The second part of the webinar focused on the prospect of regulatory divergence in some key policy areas.

Paul offered some compelling examples from across the agri-food sector. The government is currently consulting on allowing gene editing and GM technologies in the UK and is expected to review the responses in the coming weeks. This is a good example where we have observed agri-food exporters urging the government to consider ways to support the domestic industry.

So far, businesses have been facing complex challenges and rising costs as a result of a thin trade agreement that has effectively created two separate markets for regulated goods. Unsurprisingly, the business community has become increasingly vocal about the need to see some tangible gains. As a highly regulated sector historically heavily protected within the EU, we may see calls for divergence on gene-editing rules in favour of a less restrictive approach in the near future.

Paul noted that any regulatory step change would likely create a goods border with Scotland, since an SNP-dominated government would probably choose to stay aligned with EU standards, rather than a diverging London.

This could change production costs as between operations based in Scotland and England. While the border with Northern Ireland would thicken if GB/England diverged, this could create opportunities in the shape of a progressive relocation of economic activity to Northern Ireland where the regulatory environment may offer some much-needed flexibility to mainland and EU-27 exporters.

When it comes to the chemical sector, Jan outlined a number of regulatory obstacles that are bound to surface as both parties come to terms with a new reality. The most salient policy feature that is likely to inform and influence the EU but also the UK’s attitude in the future is the Chemicals Strategy for Sustainability published by the European Commission in October 2020.

The strategy contains no less than 50 policy initiatives with the aim to boost innovation for safe and sustainable chemicals. As the EU rolls out the strategy, potential for regulatory divergence is bound to materialise.

How will the UK adapt its manufacturing and exporting pattern to account for incoming regulatory bans or the phasing-out of harmful substances in chemical products? How will the EU react to continued imports of products that have not received the necessary REACH clearance? These are but two examples where policy dissonance may lead to friction.

In the life sciences and pharma sector, Keith hinted at the fact that any divergence would likely creep into some technical legislative areas. As a highly regulated sector, driven by shared scientific pursuit and technical advancement, pharma has not been making the headlines when it comes to possible regulatory divergence (vaccines notwithstanding).

Keith argued that the sector is more likely to see fairly limited in scope – albeit perhaps frequent – diverging views on how to approach certain requirements or perform specific tasks than a radical policy change. Clinical trials could be the first casualty of regulatory deviation.

With a network of experts and strategic advisers across the UK and EU – including Westminster, Brussels, EU27 capitals, and UK devolved administrations – Lexington, FIPRA International and the FIPRA Network are uniquely placed to help you navigate this complex environment. We specialise in providing tailored services to companies and trade associations in the follow areas:

I. Strategic counsel and operational planning

We support business leaders to make strategic decisions, informed by expert understanding of the political environment in the UK and EU. We also help planning for the operational impacts of regulatory and trade decisions, in particular where there is potential for disruptive outcomes.

Lexington and FIPRA can support you with the development of a single internal message, supported at global Board level; an accessible narrative for non-experts including Ministers, MPs, and the media. Lexington’s digital and media specialists have a long track record of delivering creative solutions with successful results.